South Africa is up there with the best when it comes to their sporting teams and Big 5 safaris, however, they’re a nation of self-drivers, road trippers and backyard explorers - and it’s no surprise, considering their vast road network and diverse landscapes.

The national roads here are pristine, our Founder, Neville Jones can attest to that, but instead of taking his Aussie word for it, we’re sharing the experience of these South African locals who went to visit Isibindi Africa Lodges in Northern KwaZulu-Natal, a place portrayed as ‘dangerous’ by the world media, but that’s simply not the case - here’s why: 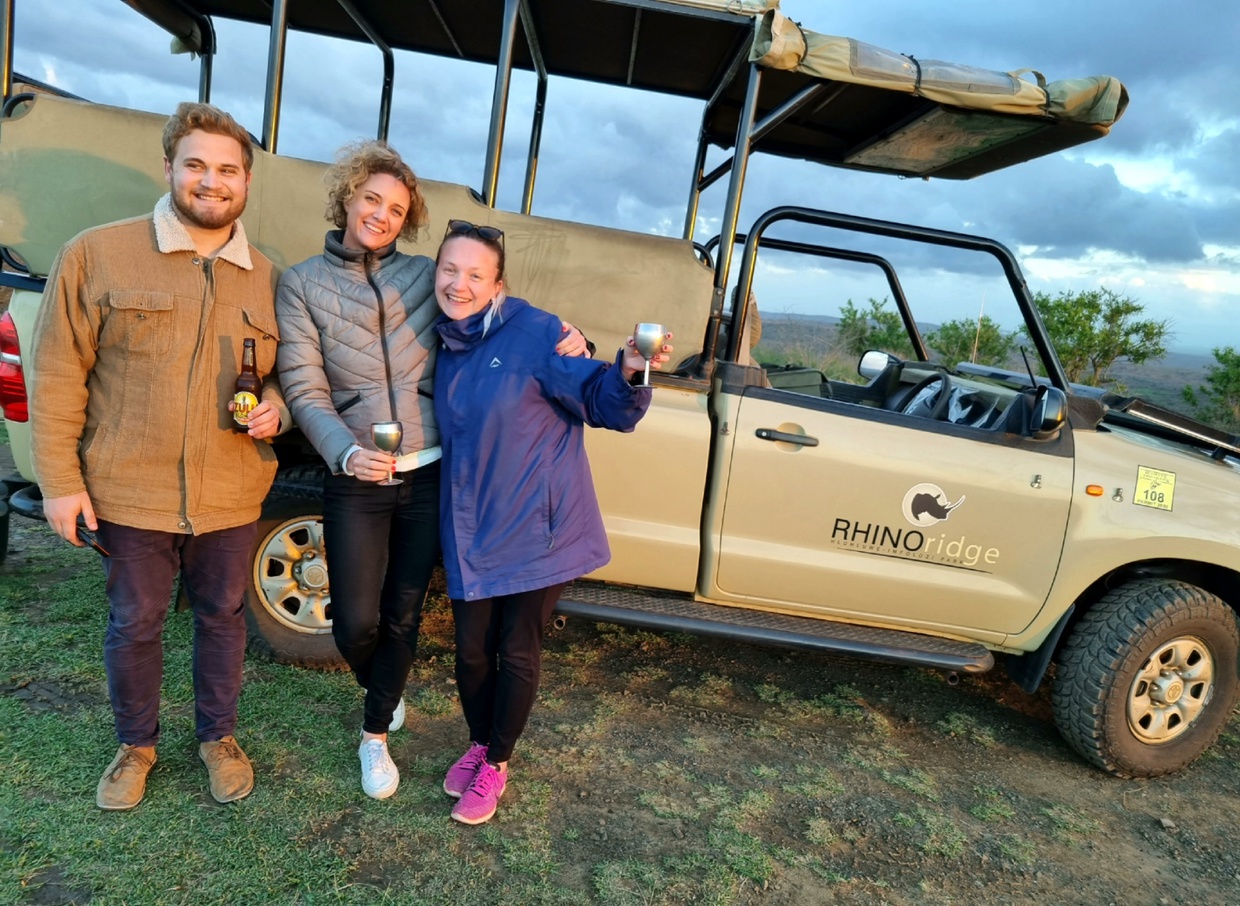 One of us had (dare we say it) never been on a safari before - yet she called herself a ‘South African’? Our rental car driver was a seasoned safari-goer who spent weeks in the Mara doing her Masters - talk about choosing the right thesis topic! We also had a budding film director who is always looking for people to meet and content to capture. We may have looked like an odd bunch, but our goal was to experience places few have seen and leave with real stories to share with the world. South Africa is nothing like what you see on TV, that’s for sure!

We landed at King Shaka International Airport and hit the N2 en-route to Sodwana Bay - a five-hour drive towards the last bit of South Africa before reaching the Mozambique border. A month prior, KZN had been rocked by looting and political unrest, something that we'd never seen before as a nation. Yet our tenacity and resilience showed its true rainbow colours, as people from all walks of life took a stand against the looting few.

Not once did our team feel unsafe. Not once did we see any traces of what had happened. Instead, we felt proudly South African and even more motivated to show off this beautiful country for what it really is. You have to drive on its roads, stop for a cow or two to cross, and meet its local people to feel the pulsating energy of this great land.

Thonga Beach Lodge - Are We Even In South Africa? 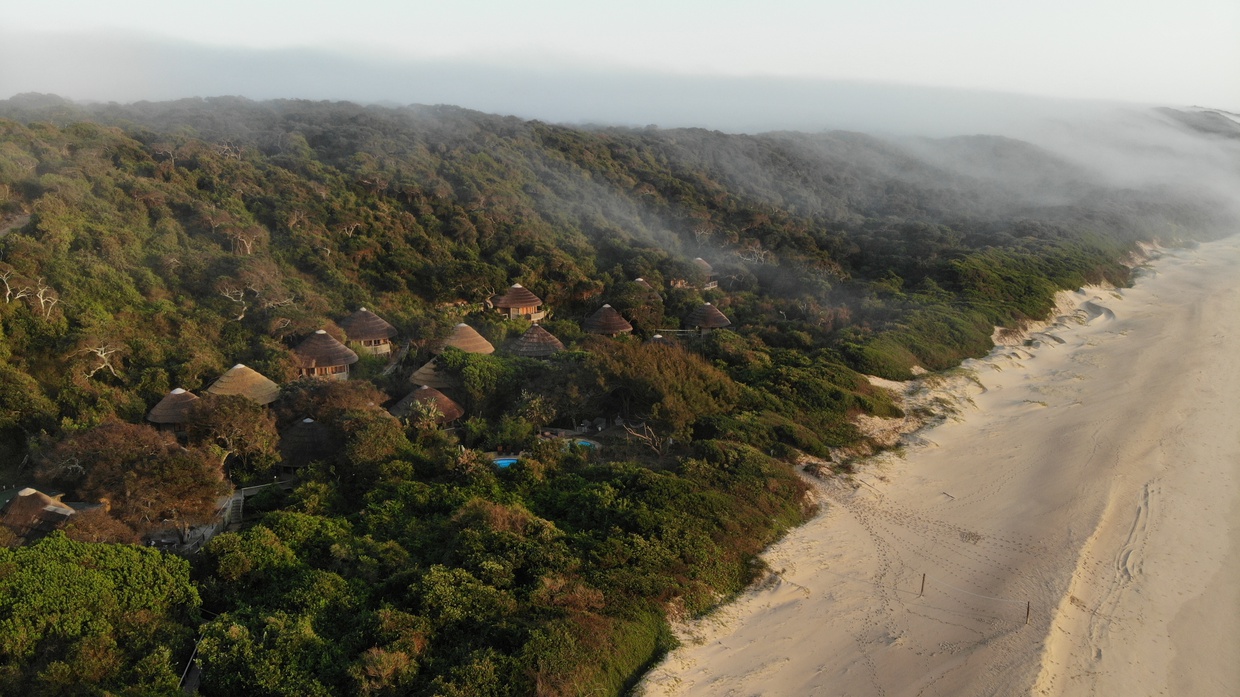 After arriving in Sodwana Bay (South Africa's scuba diving capital), we were transferred in a 4x4 vehicle by Mabibi local Godfrey, who told us stories about local residents and the history of the land in the lead to Thonga Beach Lodge. Now, this is where it got interesting! The tarred roads turned to sand, and we suddenly saw parts of rural South Africa, forgotten by time and hidden from the world, yet looking out over it from the rolling KZN hills.

For an hour, we traversed twists and turns until eventually, we got to the top of an ancient forested dune where we suddenly heard (and smelt) the Indian Ocean below us. Was this even real? We needed a pinch - and a drink. As Stellenbosch locals, we always thought that we could claim the title of living in the most beautiful part of South Africa - we had to think again! Thonga Beach Lodge and the iSimangaliso Wetland Park's coastline had rocked the podium for us, that's for sure! 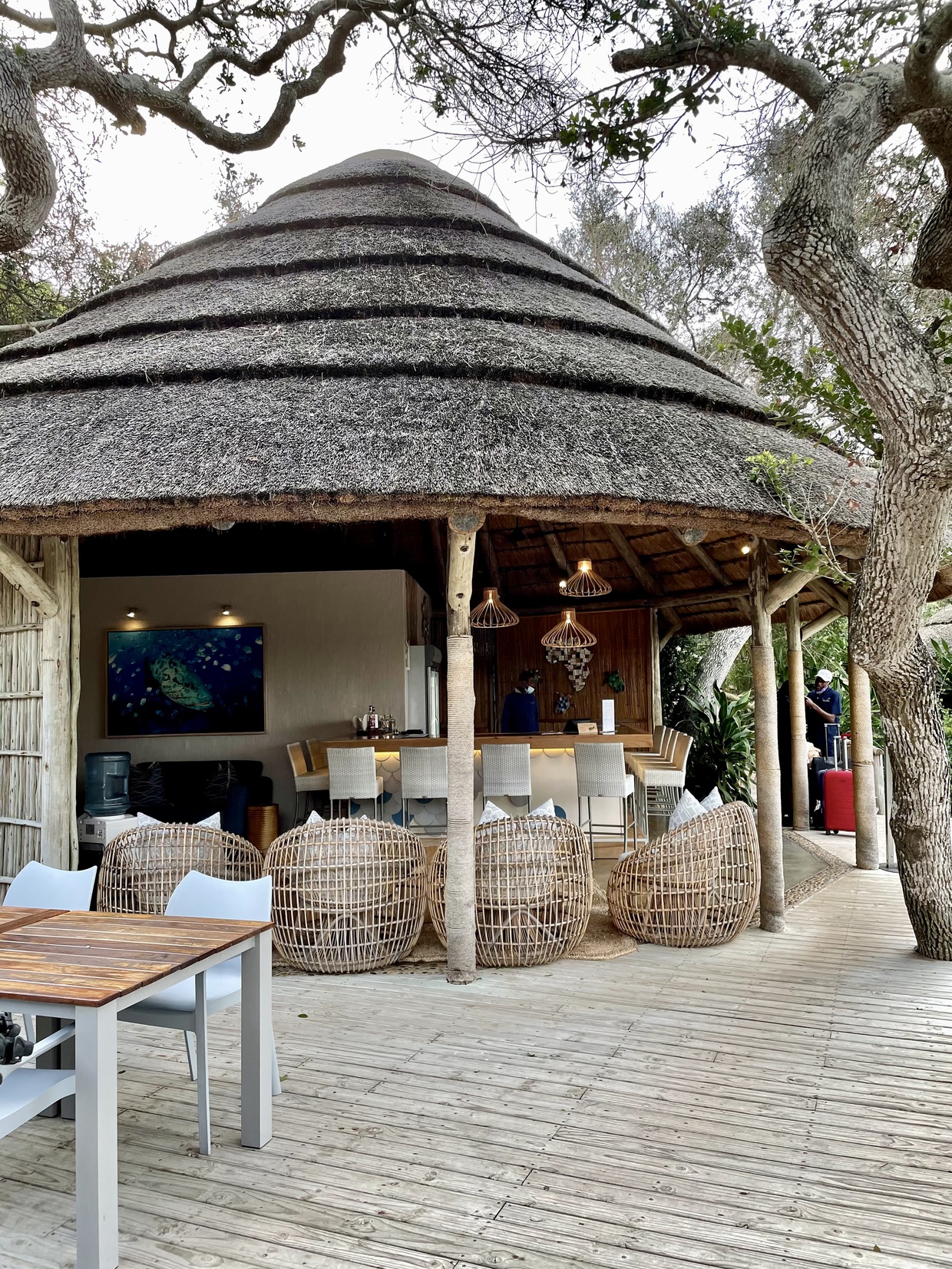 That night the team got a taste of 'home' (not that we were missing it at all) over a bottle of wine while dining on a 3-course meal under the night stars, with the waves providing all the ambient music. Thonga Beach Lodge hosts every meal outside - weather permitting, although it usually is in this part of the world! 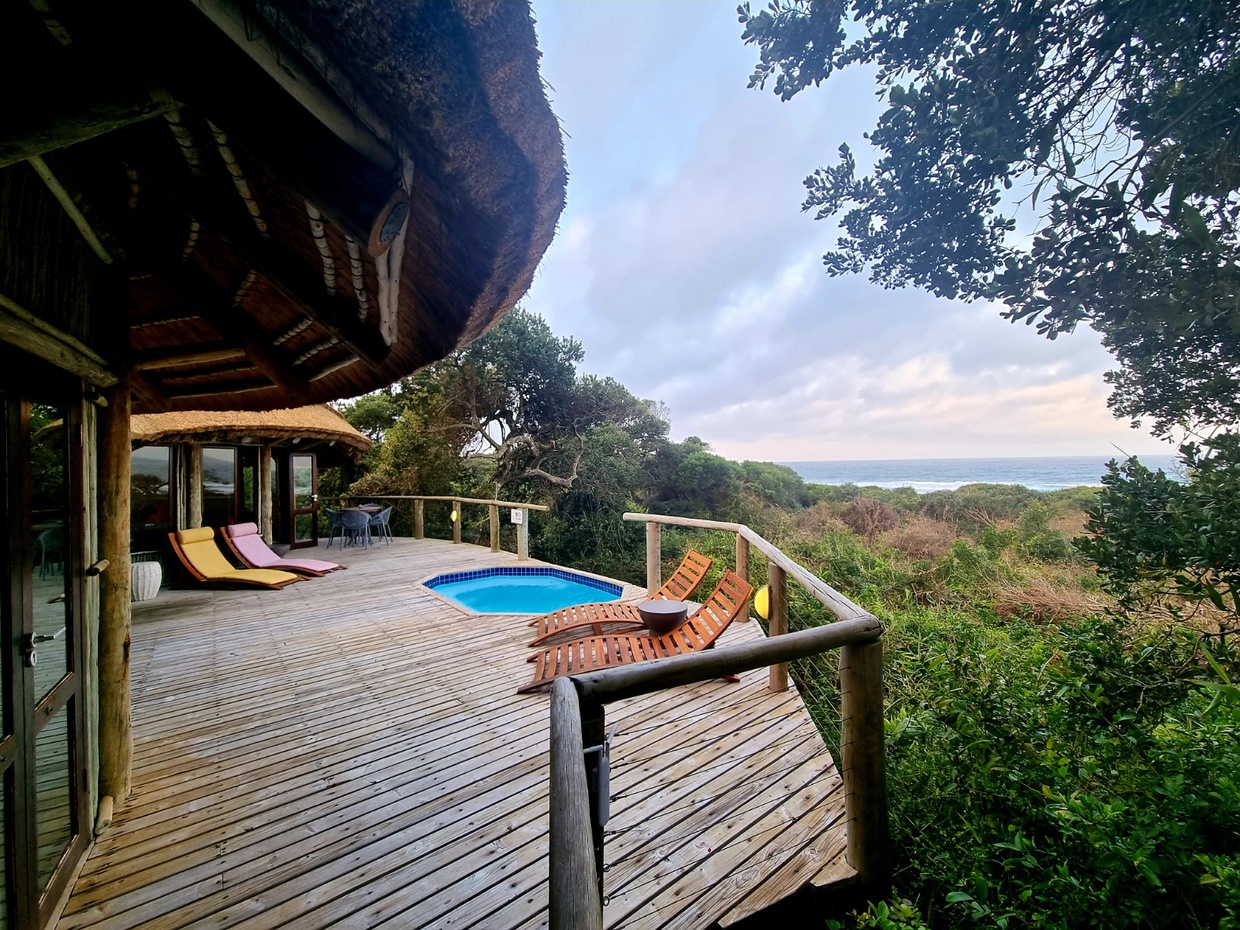 Our thatched and glass rooms were nestled in undulating dunes, built on raised platforms to bask against the beach below, and filled with everything we needed. The only thing missing? Our families! Never before had we seen such beauty. It's as if heaven was constantly calling, demanding its beach and forest back! 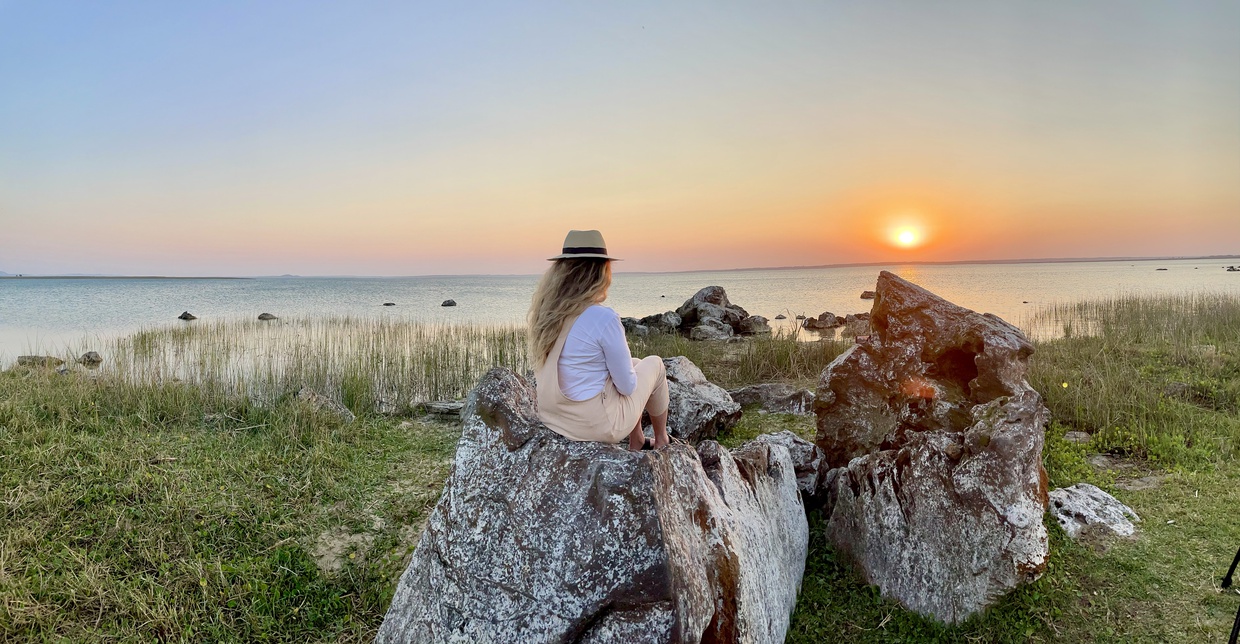 Thonga Beach Lodge is a place to be shared, and next time we'll bring our partners (it's so romantic), and perhaps also the kids too, as the Deluxe Ocean Rooms have their own private plunge pools! Unfortunately, we were a bit too early in the season to spot the turtles nesting and hatching, but that's another reason to return (not that we needed any). 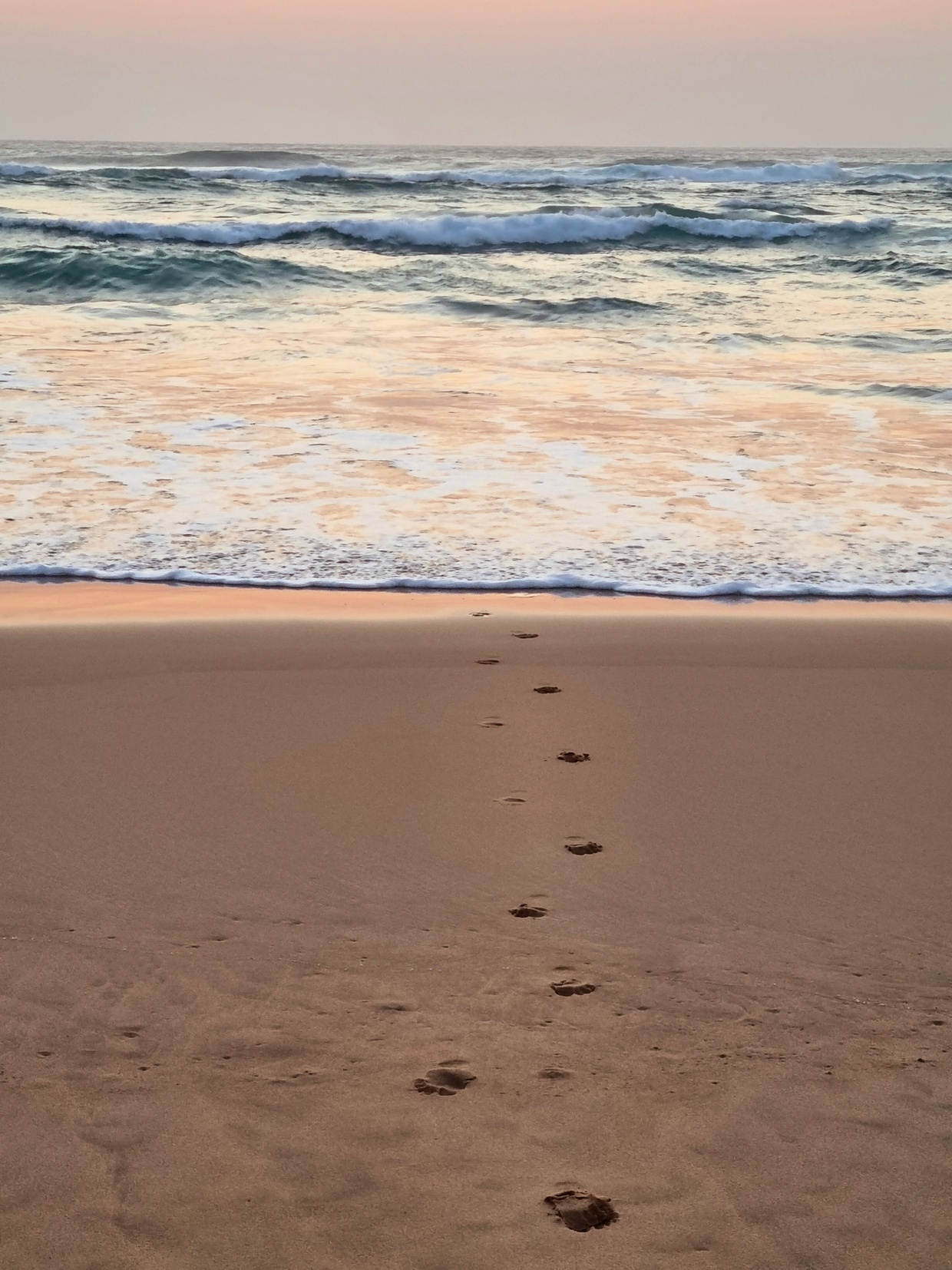 As the sun rose, so too did the sand between our toes with a beach walk where we went kilometres without seeing another person. Still, again, we never once felt unsafe. Thonga Beach is the only lodge granted permission to 'set up shop' along the beach in the UNESCO World Heritage Site of the iSimangaliso. This is all thanks to its commitment to working alongside locals and empowering the surrounding Mabibi community. You can read more about this here.

After breakfast, we (literally) hit the waves with a 2-hour boating experience where we got to see dolphins swim up alongside us and snorkel amongst turtles. However, a humpback whale and her calf stole the show - they always do! Just as we were about to turn back to the shore, these two must have thought, "oh well, if you insist", before breaching and putting on a synchronised display. National Geographic, eat your heart out! 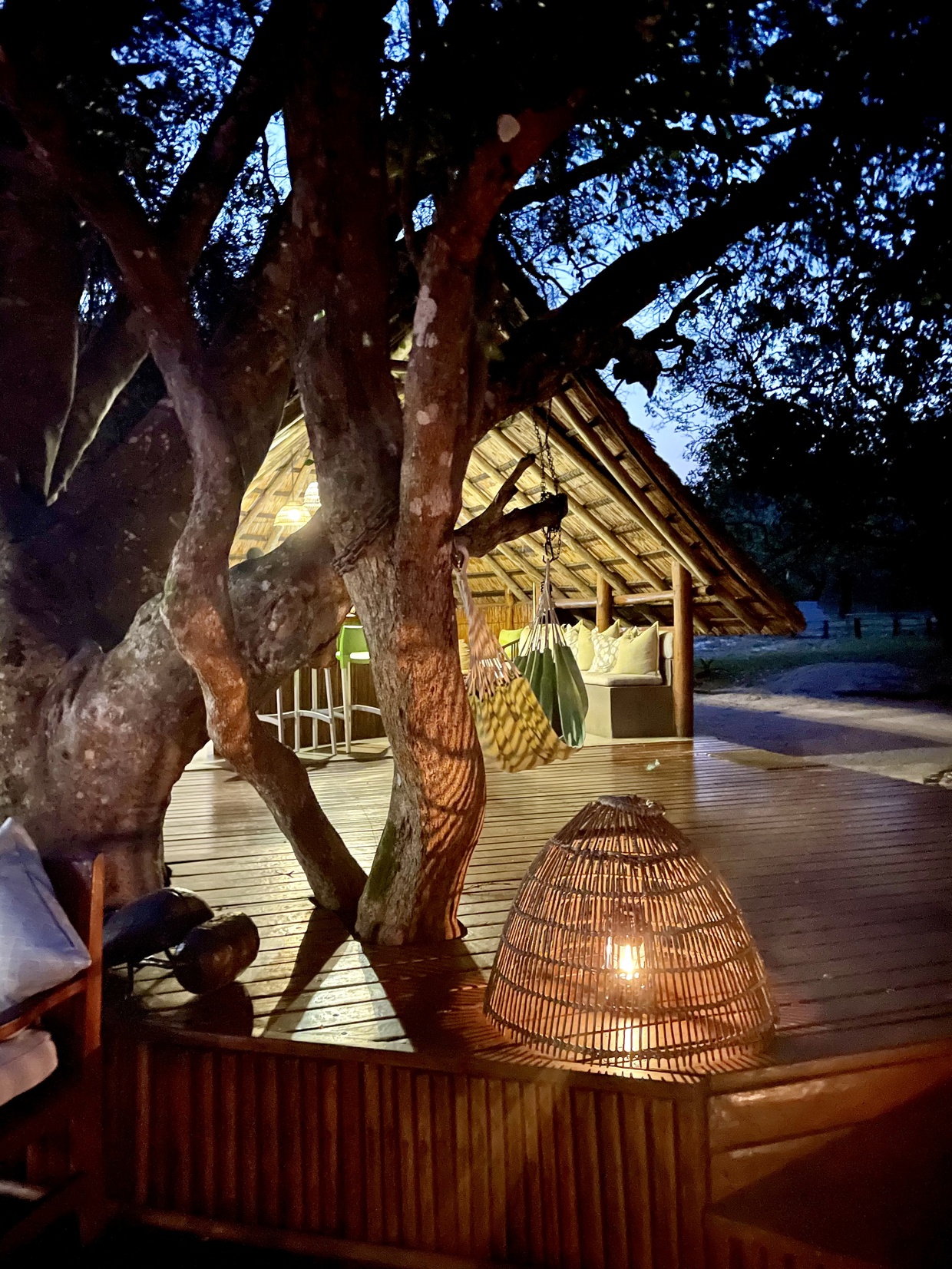 Our hearts were now full, our bodies, well, sort of tanned, and it was time to head off to our next stop, which involved another 4x4 transfer, this time from a bustling town called Manguzi. To give you an idea of how far up north we were in KZN, some Mozambiquan's opted to do their grocery shopping here. Again, we drove through sandy trails that looked more like paths than roads until we eventually reached an idyllic lake and the unassuming entrance to Kosi Forest Lodge. 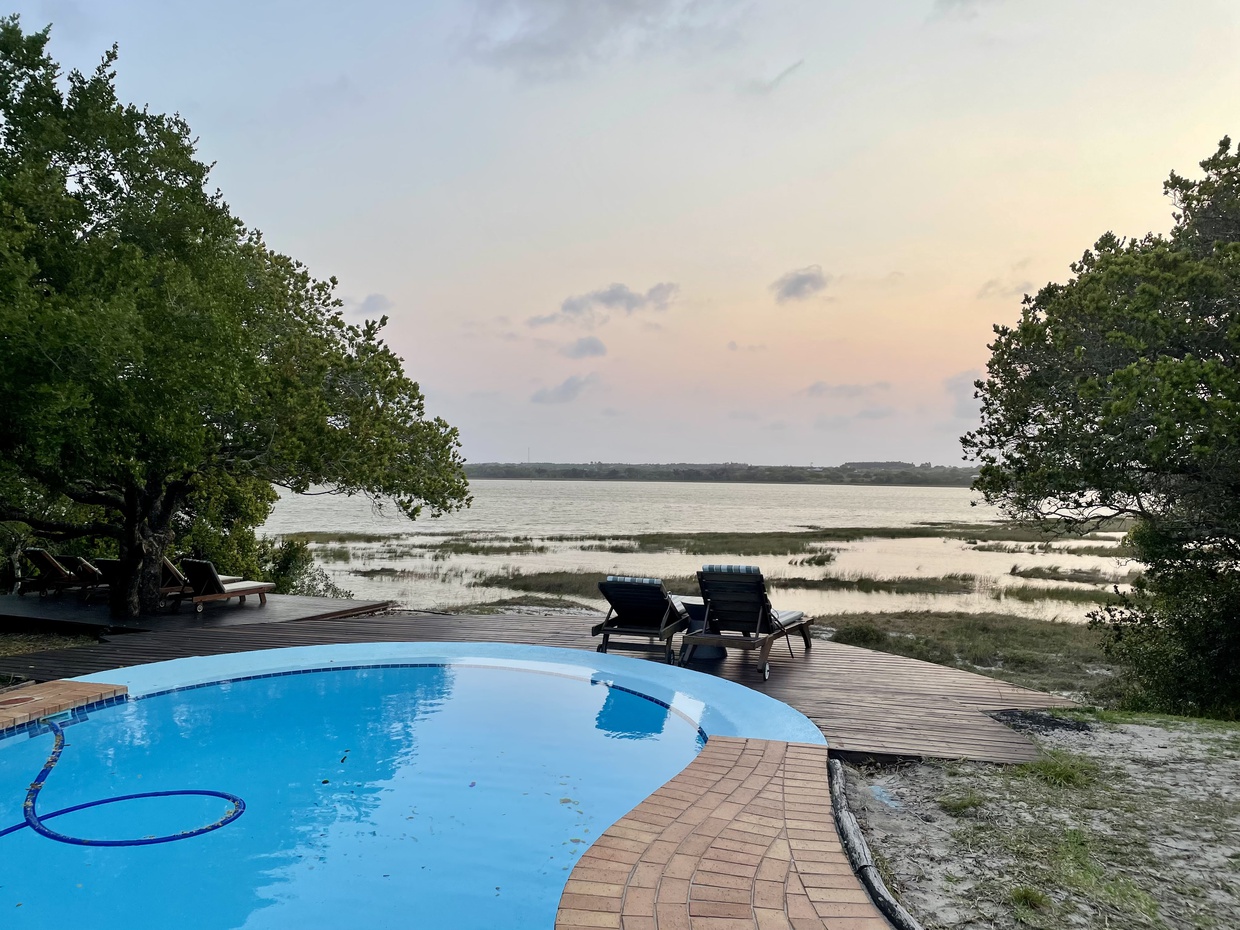 Now we have to add a disclaimer: Kosi Forest Lodge is not a place where you come for clean feet and luxurious accommodation - although each cabin's outdoor bath and shower is quite dreamy! The paths between your rustic cabins are sand, and we think it's so that mother earth can rise between your toes, tickle your skin and imprint on your heart. This is a destination for birders and nature lovers. You come to Kosi to clean your soul, drawing strength from the ground and inspiration from the lake system which mirrors the sky - only to be rippled by the occasional splashing hippo.

Kosi Forest Lodge feels wholly removed from the concept of time and 2021 life. It's a place that's been left alone by the greedy clutches of everything wrong in this world. You come here to get back in touch with what's important, and don't be surprised if an endangered Palm Nut Vulture watches you doing so. The birds here sound so loud, but perhaps it's because we're so used to drowning out their songs and tweets with the noises and demands of city life? 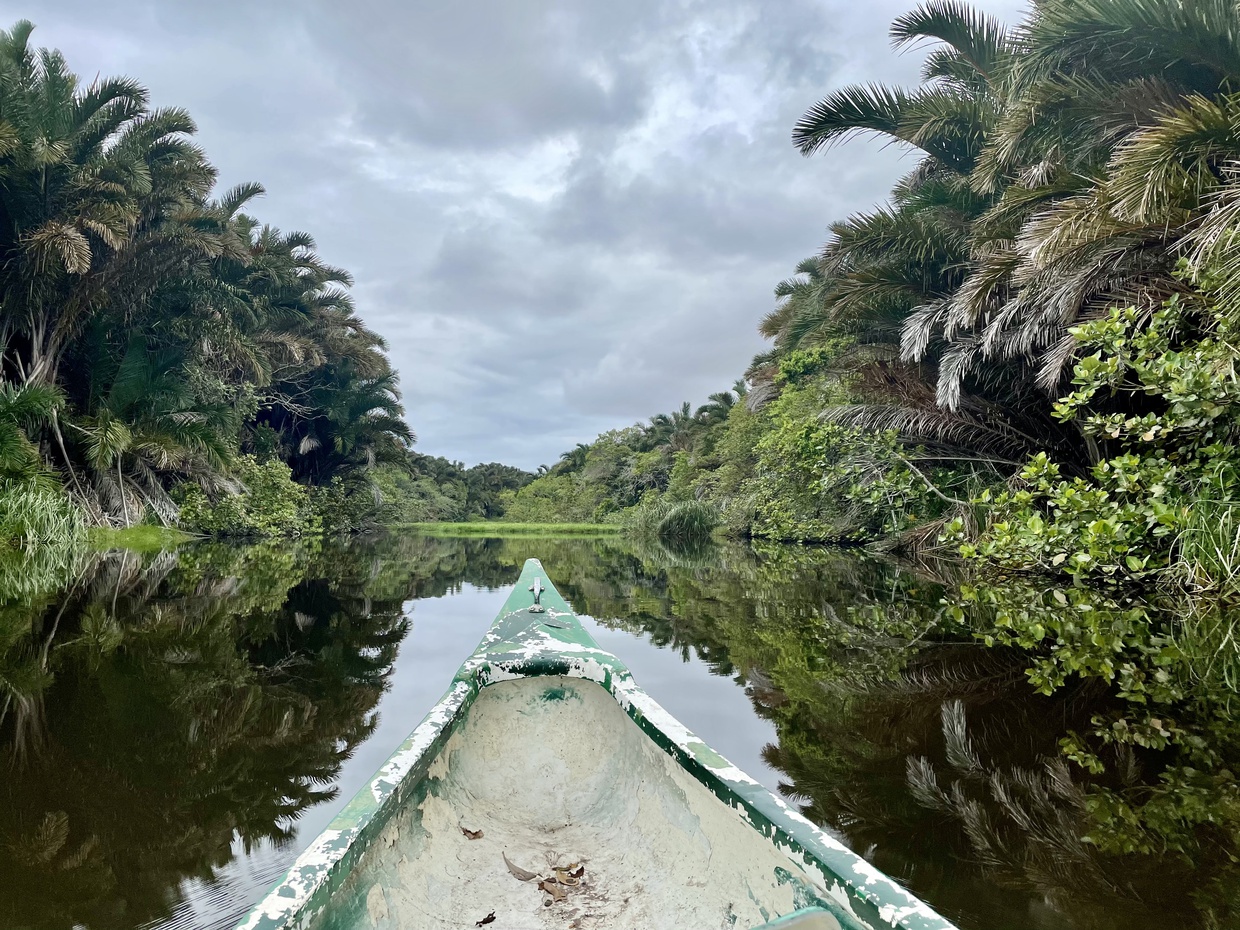 Now the best way to get the full Kosi experience is to take the lakes. This is where all you hear are the gentle splish-splashing of your canoe paddles as you wade through channels under a canopy of dense forest and Raffia Palms. Who knew scenes like this ever existed in South Africa? We felt as if we'd been transported to the Amazon in South America!

That afternoon we switched paddles for paradise, with a boat excursion along all 4 lakes, moving from freshwaters to salt waters as we got closer and closer to the sandy estuary. It's as if the birds knew that a creative team were on its shores, for an African Fish Eagle perched itself atop one of the centuries-old fishing traps and let us get within a few metres of it to shoot some content - a definite influencer in the making! However, for a comprehensive list of all the birds you could catch a glimpse of during a stay at Kosi, click here - you'll see why birders flock here. 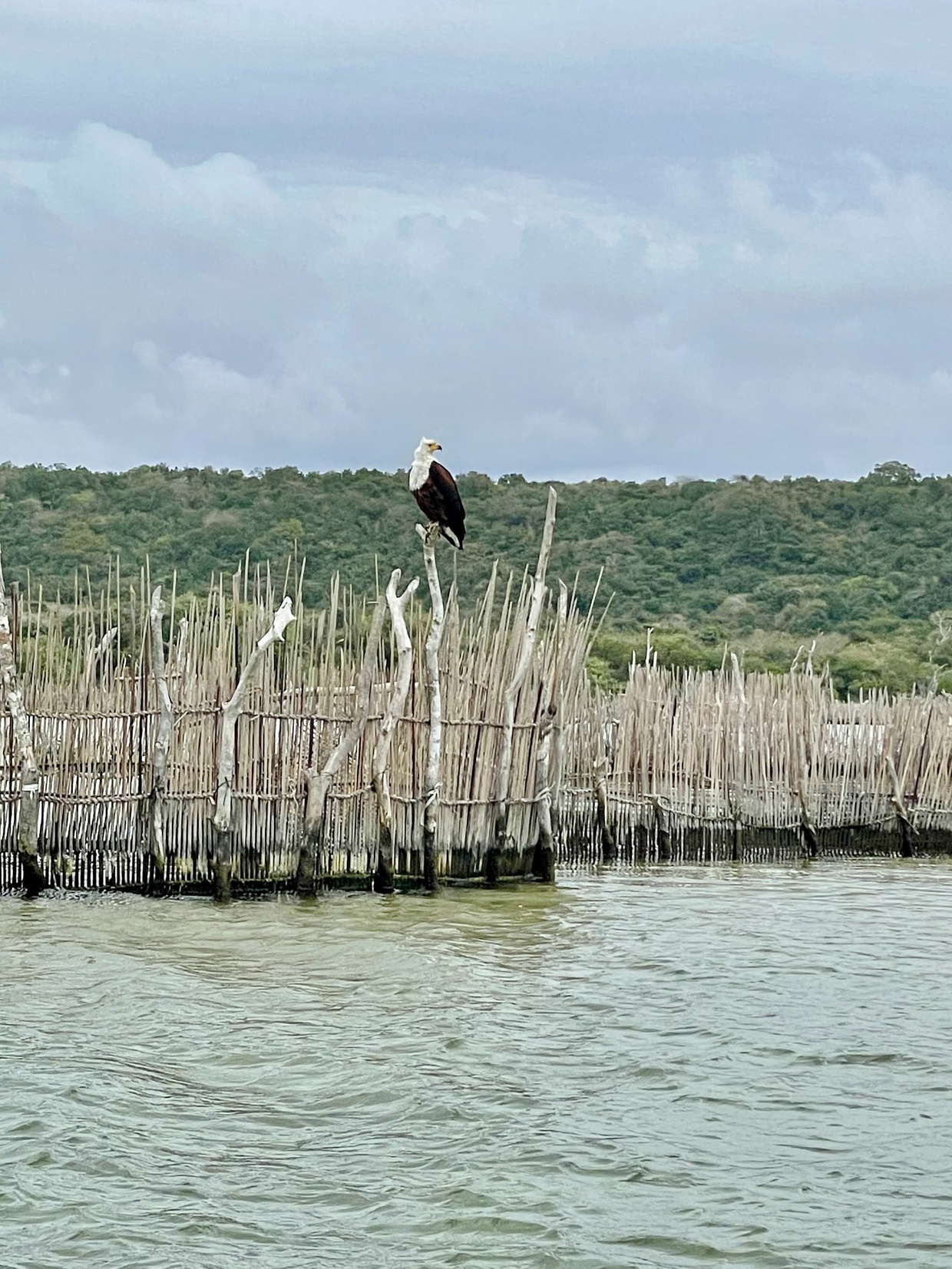 Walking on the Wild Side at Rhino Ridge Safari Lodge

We were back on the road heading towards Rhino Ridge Safari Lodge in the Big 5 Hluhluwe-iMfolozi Park. This is the oldest proclaimed game reserve in Africa and home to "Operation Rhino", and other anti-poaching programmes started in the 1940s by Dr Ian Player. You can read more about this here. 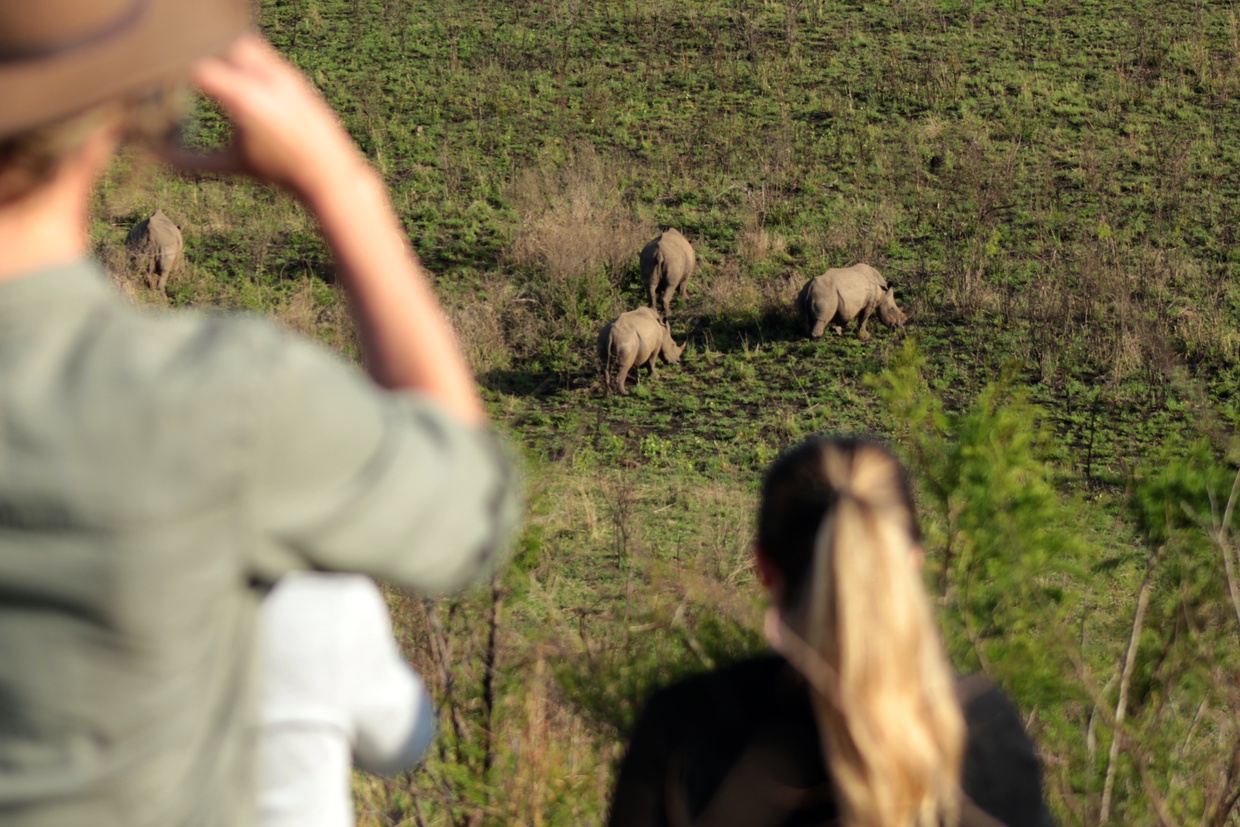 Every morning and late afternoon, we went on game drives where we got to see plenty of animals. While this certainly was exciting, the highlight was the guided bush walk with our guide Sbonelo, who showed us everything from a Trapdoor Spider to plenty of rhino. This wasn't just an exciting walk; it was a spiritual awakening.

Few words or photographs can explain the allure of South Africa, and while we do our best to promote this great land, our African Trails Guide, Sbonelo, said it best: "Give credit to Mother Nature because this is an oil painting that she painted many years ago, way before you got here." 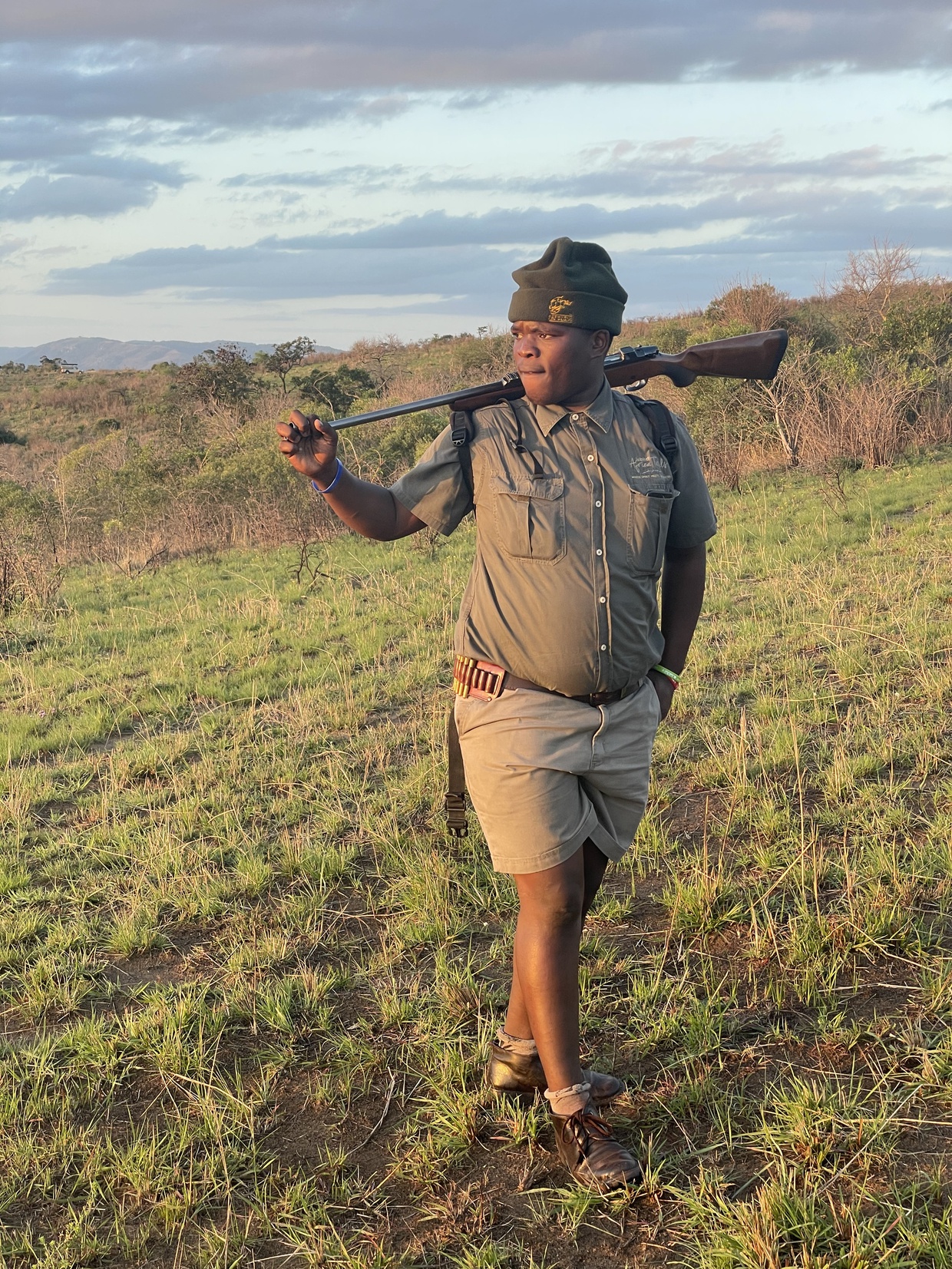