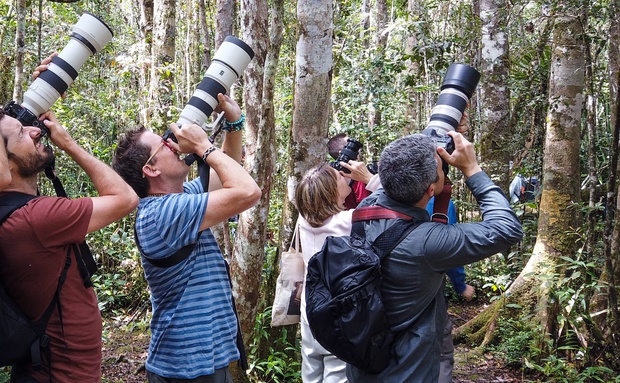 A photography safari is a special form of the wildlife safari.

Rather than living in the moment, the goal of a photography safari is to capture a shareable moment so other people can live that moment vicariously with you. This difference affects every aspect of the safari.

Whilst they often stay in the same lodges as wildlife safaris, photographers care more about certain features. Like plenty of powerpoints in the rooms and a desk to sit at whilst reviewing photos.  Photographers never rest in the downtime between game drives.

On our photo safaris that include a specialist instructor, we need a presentation area, where guests can share their photos, have them reviewed and get ideas, tips and guidance from the instructor.

Photographers are happy to compromise on some comforts if it means being located near unusual landforms.  They like to leave camp earlier than wildlife safaris.  There is nothing better than getting the first rays of light beaming through the mist and hitting a big male lion from behind, giving him an orange aura.  It's a technical challenge worth the effort!

A photographer's interest often falls as the sun rises, so they're usually back in camp before anybody else.  And leave later in the afternoon.  That said, some of the most spectacular photographs in Africa have been made under a high sun and we encourage our photography guests to try some special techniques.

When they're on a game drive, photographers will often sit for hours waiting for the shot, especially if this is not their first trip to Africa.  For them, an image of some revealing behaviour is worth more than any number of "record shots".

Some photography safaris have no interest whatsoever in wildlife.  The ancient landscapes and ghost towns of Namibia, for example, are so unusual and iconic that we have run many safaris to focus exclusively on those.

We run photography safaris in all of our destination countries with itineraries suitable for every level of experience from beginner to professional.  The owner of Experiential Travel, Neville Jones is himself an awarded professional photographer.