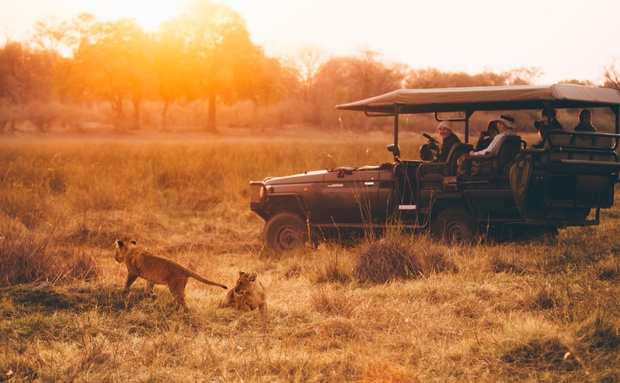 The word safari has its origins in the Arabic word "safar", which means "to travel" or "to journey". The word entered the English language as "safari" via Swahili (Kiswahili).

So, a wildlife safari is a journey in Africa that focuses on the unique, extraordinary and sometimes endangered wildlife of the continent.

In the 18th, 19th and 20th centuries, a hunting trip in Africa by Europeans or Americans was a significant undertaking, employing many porters with horses to carry provisions, equipment, tents, bedding, weapons and so on.  When former President Theodore Roosevelt and his son landed in Mombasa, Kenya to start their expedition, they employed 250 porters!

Safari entered the English language to describe a uniquely African expedition requiring significant planning and preparation, involving a little danger and delivering rare and enviable experiences.  In those early days, such an expedition almost always included hunting, usually for "trophies".  But that was an association.  Safari has always meant "journey".

Happily, hunting safaris have almost disappeared and we have never mounted one.

Bearing in mind the era in which the word safari entered our language, a real safari should never feel rushed.  Every wildlife safari has a familiar rhythm.  Generally, you will arrive in camp just before lunch.  That meal is often multiple courses but light, with the main meal of the day served at dinner time.  After lunch you'll have a few hours to rest, read or write in your journal.  Or just sit in a chair and gaze in the bush, perhaps across a lagoon.  "Tea", that traditional English light meal of sweet or savoury temptations between lunch and dinner is served between 3pm and 4pm.  Then it's time for your afternoon game drive.

A game drive is usually conducted in a large 4x4 with up to four rows of seats, tiered so that everybody has a view out the front.  In water-based camps, a game "drive" might be conducted in a boat and some camps offer a walking safari alternative with an armed ranger.

Wildlife safaris are often mounted in former hunting concessions.  It has taken dozens of years but the wildlife in these rehabilitated concessions have learned that they have nothing to fear of the 4x4s.  The vehicles can and do get remarkably close to the wildlife except elephants, hippos and rhinos.  Those animals deserve and expect to have their personal space respected.  Other species, especially lions are not at all disturbed by the vehicles.  Lions would lie in the shade of a car but most professional guides don't allow that kind of interaction.

Some game drives are run by a driver who is also the spotter and guide.  In other parks, there may be a specialist spotter as well as the guide/driver.  In any case, our guests are often amazed at what the professional guide can see and find for them.

Having found a sighting, the vehicle will be switched off so that the guests can quietly observe the wildlife.  In a quiet vehicle like that, the guide will sense when you've had enough and suggest that he drives on to find something else.  The guides are very intuitive.  We were once on a safari in Botswana where we had been blessed with many lion sightings.  On the third day, we drove straight past a pair of mating lions because when he asked, the guests said they'd seen enough of that!  That would never happen on day one.

As the sun approaches the horizon, the guide will find a place for "Sundowners".  Yet another African tradition you'll come to love.  The location will be quiet, scenic, open and just a little bit romantic.  From a specially designed trunk, the guide will produce beverages and snacks.  The favourite drink is Gin & Tonic but you will have been asked in camp to name your poison.  And the chef will have prepared some delights to eat.

You return to camp after sundowners.  You'll have plenty of time to prepare for dinner.

Dinner is another multi-course meal prepared by talented chefs taken at a leisurely pace.  You can choose to dine alone if you wish.  Some camps encourage guests to share a communal table.  Referring back to the origins of safari, the host and guest had customary duties.  The host would provide food and lodging and the guest would bring news from afar.  Such news was very precious but it was the friendship and sense of community that arose from its sharing that was far more valuable.

After dinner, you'll likely be escorted back to your room.  People choose to come to these places because they are wild.  Whilst dangerous animals rarely come into camp, we never take unnecessary risks.

Put your camera batteries on charge and set your alarm because tomorrow you'll be up at dawn.  Sleep should come easily after such a big day.

You'll likely meet in the camp lounge for coffee/tea and a snack.  (There'll be a full breakfast later.)  Be careful with the rusks.  They are extremely hard and designed for dunking.

At the agreed time you'll mount up and head out on your morning game drive.  Whilst a safari should not feel rushed, certain things, like departure times are quite rigid.  So, allow yourself plenty of time to stroll down the path to the vehicle and be comfortably seated before departure time.  Leisurely and on schedule.  There is a reason for leaving camp early.  The nocturnal species are still moving around and the diurnal species are just waking up.  So you might catch lions regrouping and returning from their nightly hunt.  Their mobile behavours are far more interesting than sleep, which they can do for 20hrs/day.

A couple of hours into your game drive, you'll stop for more coffee/tea and snacks.  Then you'll take a leisurely drive back to camp in time for a more substantial breakfast.

You'll get another couple of hours of free time before lunch.