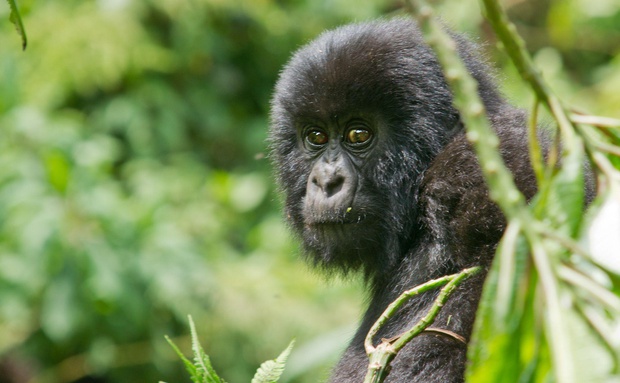 The only place to see the endangered Mountain Gorilla is in the wild because they don't do well in captivity. Thankfully, there are none living in zoos anywhere in the world, although you may see the smaller Western lowland gorilla in your zoo.

The mountain gorilla (Gorilla beringei beringei) is one of the two sub-species of the eastern gorilla.  Under pressure from habitat loss, mountain gorillas have retreated to two domains.  One is around the Virunga volcanic mountains at the junction of Rwanda, Uganda and the Democratic Republic of Congo (DRC).  The other population is about 50km north, in the Bwindi Impenetrable Forest in Uganda.

The situation of the mountain gorilla was most effectively brought to light by Gorillas in the Mist, a movie starring Sigourney Weaver and Bryan Brown.  It was based on the autobiographical account (of the same name) of the work of primatologist and conservationist Dian Fossey.  Fossey is known for her extensive study of the mountain gorillas, conducted from her modest research camp in the Virungas from 1966 to 1985.

Fossey was most disturbed by the effects of poaching and she collected evidence that the gorilla populations were plummeting as a consequence.  Fossey's activist approach and her contribution to the arrest and imprisonment of poachers made her very unpopular with some sections of the local community.  She was also very concerned about the possible impact (especially through the transmission of diseases like influenza) that tourism would have on the gorillas.

Fortunately, the governments of Rwanda and Uganda heeded her warnings.  The military of both countries assiduously patrol the forest to defend the gorillas from poaching.  Tourism activities are tightly controlled to prevent disease transmission.

Today, the Dian Fossey Gorilla Fund International promotes tourism, which they say helps to create a stable and sustainable local community dedicated to protecting the gorillas and their habitat.

The result has been a remarkable increase in both populations of mountain gorillas.  When we first started visiting the gorillas in Rwanda and Uganda, the total population was said to be about 700.  Today it exceeds 1000.

A typical gorilla trek requires at least two nights stay in a lodge near the mountain with the trek conducted on the second day.  You start just after breakfast and you'll be driven to the departure point.  Here you will be briefed thoroughly on what to expect and the regulations you must comply with.  You must not, for example, approach closer than 7m to the gorillas.

Less than half of the gorilla families are habituated to humans.  The remainder live without any contact with tourists.  Your group will be assigned to a family of gorillas.  The trackers know approximately where the gorillas are on the mountain, but they are mobile.  Your trek through the mountainous forest could be short (1 hour or less) or very long (up to 5 hours.)  The guides try to match the experience to your abilities.  So people who enjoy trekking for a few hours through the jungle will likely get that.

You are encouraged to employ a porter for the day.  This employment is a vastly better alternative to other forms of income that might include poaching.  The porters will be waiting for you at the departure point.

Your lodge will help you prepare for your trek.  Some will provide a backpack and gaiters if you need those.  The gaiters are to keep safari ants off your legs.  Tucking your trousers into your socks is just as effective.  There are stinging nettles in the forest and your guides will point them out.  If this worries you, bring a pair of gardening gloves.

Most lodges will prepare a lunch pack, fruit and drinks to take with you.  These, with your camera and waterproof shell go into your backpack, which your porter will insist on carrying.

You will have 30 minutes with your gorilla family.  That time will fly by as you experience these massive, but generally shy and quiet animals.

The best countries to visit mountain gorillas are Rwanda and Uganda